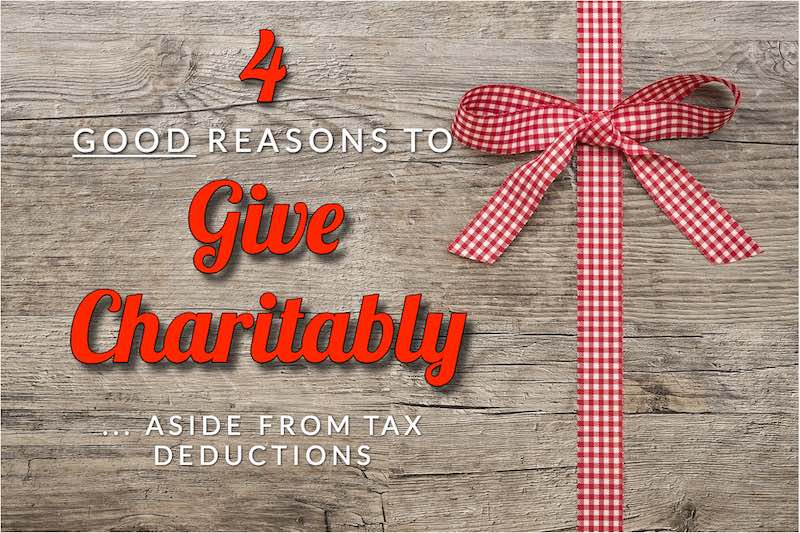 As I write this, the Senate has passed their version of the tax reform bill, and now we wait for the final version of the bill. The process isn’t yet finished (it needs to go through the “reconciliation” process, and the President needs to sign it), but we have some basic ideas about what’s to come for 2018.

I’ll do a deeper dive in subsequent weeks, but here’s the thing. Congress has four weeks to get this done.

To think that they will do this well, and NOT leave behind holes, “provisions” and other goodies for smart tax professionals (like me) to take advantage of … well, the prospect is almost appetizing. I’m looking forward to diving into it and passing along the savings to YOU.

Because there are always hidden savings.

But here we are in 2017, operating under existing tax law, and there are still very good reasons to give charitably for tax reasons.

But I like to see New York/New Jersey Metro residents and taxpayers give charitably — whether or not they do so for the purposes of reducing their taxable income.

About which, I have some thoughts for you.

Turner-Bowman’s Four Good Reasons To Give Charitably, Aside From Tax Deductions
“My friends are my estate.” -Emily Dickinson

When we advise about or help set up tax-saving mechanisms for New York/New Jersey Metro clients to deliver their philanthropy and giving (outside of normal tax deductions), there’s plenty of discussion about the benefits of the gift for the recipient.

But what about for the giver? Here are some things to consider, as you contemplate giving, during this month of year-end appeals …

1. When you give, your emotions change.
Studies show (http://www.livescience.com/health/080320-happiness-money.html) that when individuals spend money on gifts for friends or charitable organizations, their happiness increases — while those who spend on themselves get no such boost. Even Scrooge can agree that everyone wins.

2. You might just spend it on something dumb, anyway.
As pious as you are, there’s still extra money in your budget somewhere. Create a budget for charity donations, then take some of your extra money (each month or each year) and donate it to charity. Use your spending money to make a difference instead of spending it on Brookstone junk you’ll use once. And if you think you don’t have enough, take that extra 2% you’ll be earning next year and put that toward a charity fund. For someone making $100,000, that’s $2,000.00.

3. It’s probably now or never.
Don’t pretend that instead of giving money, you’re going to donate time. When was the last time you volunteered at a soup kitchen? Don’t let your mind fall for this trick. Send the money now or you’ll end up giving nothing.

4. Get ahead of your heart.
This is the biggie, in my opinion. There’s something that occurs in your psyche when you cut a big (or relatively big) check to someone in need, or to a charity organization. You feel more powerful–more dynamic. You signal to your own soul: “Money doesn’t rule me. I have more than enough, so much more than enough that I’m giving it away.”

Then, of course, something special sometimes actually happens: more money seems to find itself in your hands.

I’m not advocating a mystical pay-it-forward scheme; I’m simply making this observation over years of being a student of how money “works”. Frankly, it just seems to regularly find itself in the hands of those who give it away.

So, aside from the tax benefits … consider these as well. And I hope we talk soon …

Turner-Bowman’s Four Good Reasons To Give Charitably, Aside From Tax Deductions12.08.2017